It is the function of the Haywood County Beekeepers Chapter (HCBC) Board Members to govern the bee club in accordance with the Constitution and Bylaws of the chapter and promote friendship between all beekeeper members. As officers and directors of the club, we are at the disposal of our members, to serve them in the best manner possible, while helping to promote a healthy relationship between all club members and our local communities. Below, you will find short biographical summaries of each board member, describing their beekeeping experience and other attributes of their life.

Micky grew up in Asheville and married his best friend a couple of years after graduating from Reynolds High School.  We then moved to Wilmington, NC to receive a BS in Marine Biology, then moved to Jackson County to receive an MS in Biology from Western.  After graduate school he began working for the NC Wildlife Resources Commission as a Fisheries Biologist in Elizabeth City, NC.  After 1.5 years there, he moved to Waynesville to be the District Biologist and held that position from 1989 to 1997 when he became the first Stream Restoration Coordinator for NCWRC.  In 2005 he left State service to begin working for Michael Baker International, conducting stream restoration projects in NC and other eastern states.

My interest in beekeeping goes back to when I remember my grandfather keeping bees and raising tupelo honey in the Panhandle of Florida.  I was too little to go with him but was always interested in knowing more about what he was doing.  In 2015 my friend Doug began keeping bees and peaked my interest in doing the same.  The first thing I did was to begin attending the Haywood Beekeepers club that fall before I had any bees and started my first hive in the spring of 2016.  My apiary has now grown to 6 production hives, plus a resource hive which includes two nucs with resources that I can pull from to rejuvenate a hive or start a new hive. For the time being that is the ideal size for me. 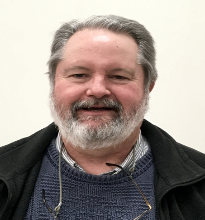 Being a beekeeper has been an awesome experience!  I love bees!  And HONEY!  I am again the secretary of this Bee Association.  The members readily share their experiences with beekeeping and are willing to help others that are new beekeepers.  I could not have done it without them! 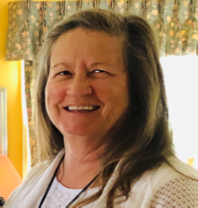 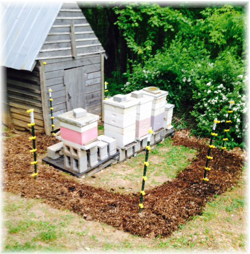 In April 2005, I inherited two hives from my dad’s apiary and I began to read as much as possible online about bees.  While living in Asheville, I learned that I could go to bee school and I signed up for the courses, completed the training, and became a certified beekeeper on August 15, 2007.  Hence, I then joined the State Beekeeper’s Association and started learning a lot about beekeeping from Ed Buchanan.  In addition, I took the written exam to become a journeyman beekeeper, however, the practical application part of the exam was in Raleigh and due to my mother being sick, I was unable to take that portion of the examination.

In 2014, I moved from Asheville to Waynesville and I joined the bee club in Haywood County. On August 8, 2015, I rejoined the State Beekeepers Association again and I took the practical portion of the journeyman test and passed it. Currently, I have three hives in my bee apiary, which is located at my house. I am employed full-time at Clayton Homes of Waynesville, and part-time at the Arc of Haywood. In January 2017, I was elected treasurer of the bee club and excitingly I look forward to getting to know fellow beekeepers of Haywood County and surrounding areas. 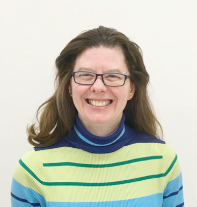 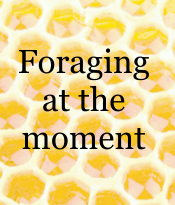 I began bee keeping about 10 years ago out of plain old curiosity.  I have three healthy hives coming out of the winter and I will split them in May.  I also have three nucs coming at the end of April 2018.  I just enjoy messing with bees and poking around in the hives to see how a bee colony works and functions throughout the year.  I also enjoy teaching school kids about bees and their importance in our environment.

I first began beekeeping in the early 1980’s when Mr. Eston West of Canton gave me my first hive to manage as his health issues began to diminished his ability to continue his involvement with bees. My interest in and number of hives grew during this period, maxing out at eight colonies during this first period of beekeeping. Heavy travel demands for work limited my ability to effectively manage the bees and by the early 1990’s I gave up on beekeeping on this first round.

After retiring, my interest in the honey bee and beekeeping had not diminished, and I once again began beekeeping by starting with Clemson University’s beekeeping course to reintroduce myself to beekeeping in this new era for bees. The new millennium had brought a radically different approach to managing bees with the invasion of mites and other pests and diseases we had never heard of in the 1980’s.  I am now into my eighth year of beekeeping in this second life as a beekeeper. Again, I am keeping the number of colonies under ten, depending upon how successful I am in managing and over-wintering the colonies.

My hives are at the farm off Kim’s Cove Road outside Canton. In the past, I have kept hives for short periods in the upstate of South Carolina, primarily to facilitate an earlier Spring build-up. I found this was much too labor intensive to be effective so that was a short-lived experiment. I have been a member of the NC State Beekeepers Association since 2014 and a member of the HCBC since 2014. I am a retired Project Manager from Fluor Daniel Construction Company, where I managed engineering and construction projects for the food and beverage industry. 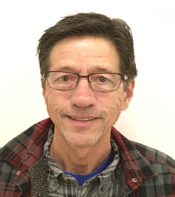 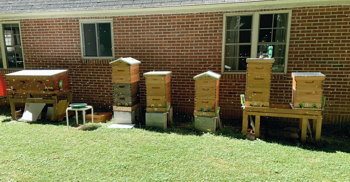 As webmaster for the Haywood County Beekeepers Chapter (HCBC), this “certified” beekeeper has the honor and responsibility of ensuring the “web-hive” remains healthy, that all appropriate information is updated in a timely manner, and in conjunction with the guidelines of the other directors and officers. The web-hive must be user-friendly and allow beekeepers easy access to the information that the staff has deemed necessary for posting to this website. It is astounding to see such an amazing insect in action for without these honey-producing creatures there would have less food to place on our table each day and thus, I thank our Creator for the honeybee because, I love the taste of honey.

Bill tells the story of coming home from a day on the lake and finding a bathroom full of bees! A swarm had entered through the bathroom vent and several hundred had found their way into the bathroom.  Watching the beekeeper come and collect the swarm begin a fascination with honey bees.  The biggest and most important milestone for Bill's beekeeping is that he met his wife in Beekeeping Class.  Bill completed the Journeyman level of the NC Master Beekeeper Program through the NC State Beekeepers Association (NCSBA) and progressing on the Master level.  Additionally, he has twice been recognized as the NCSBA Extension Worker of the Year for his support of the local bee club and beekeeping support activities. Bill was awarded a lifetime membership to the Haywood County Beekeepers Chapter (HCBC) during the February 2017 meeting for his many years of dedication to the club. 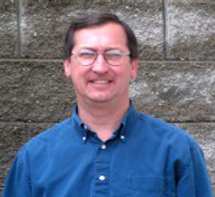 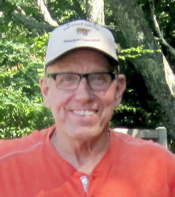 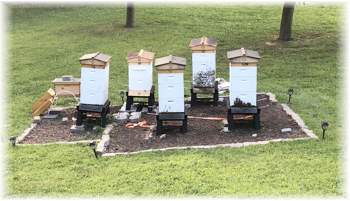 I began beekeeping more out of curiosity than anything else.  When I was growing up, an elderly neighbor had a couple of hives near my home and I enjoyed seeing the honeybees visiting the white clover in our yard.  But, I had missed seeing them for years.  While on a consulting trip, I was browsing the shelves at a Barnes and Noble and came across a book on beekeeping and the more I leafed through it the more intrigued I became.  The rest is history and I was hooked.  I picked that book up in February and by April I had two beehives in my back yard.  My apiary quickly grew to three hives in its first season.  During my first overwintering period, I lost one hive and successfully brought a nucleus hive through winter reconstituting three hives.  After this last year, I have five hives in the apiary and so far have lost none of these.  I am interested in getting into queen breeding specifically focusing on VSH queens to assist with Varroa Mite control.

I am employed full-time by CollegeNET, Inc.  Our company makes event and class scheduling software which I travel across the country implementing for colleges and universities.  My client list includes small community colleges all the way up to Ivy League institutions like Cornell University.  I am a graduate of Western Carolina University (many times over!) holding a BSBA (double major in accounting and economics), an MBA, a BA in English Literature, and an MA in English Literature.  My focus area for my MA degree was medieval literature which is how my apiary got its name from Beorn in J. R. R. Tolkien’s The Hobbit.  A bit of trivia, the word, Beo, in Old English means “bee”. 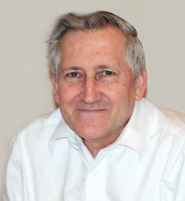 Rick Queen is a Haywood County native, attending Tuscola High School. He received an associate degree at Wingate College and graduated from Haywood Community College with an associate degree in Fish and Wildlife Management. He founded Queen's Bee and Berry Farm in Transylvania County and managed the farm twenty years. During the 1990's he was president of Transylvania County Beekeepers Club.  After moving back to Waynesville, Rick worked in hardware and he returned to beekeeping in 2013. Rick is an active member of the Haywood County Beekeepers Club and the NC State Beekeepers Association for four years and he maintains around thirty-four hives for honey production. Rick recently completed the Journeyman level of the NCSBA Master Beekeeping Program and serves as a beekeeping mentor. 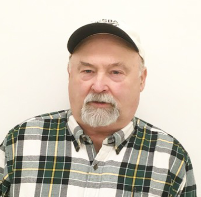 Allen's adventure into beekeeping began as a youngster when his father and grandfather were beekeepers in the mid 70's.  Allen states, "Beekeeping is an enjoyable hobby of mine and I have been keeping bees for over ten years.” Further, Allen has completed the Master Beekeeper or third of four levels in the Master Beekeepers Program with the North Carolina State Beekeepers Association (NCSBA)." Allen has also completed sessions one and two of the NC 'Born & Bred' program and he is currently engaging in queen rearing and making splits. He is using natural methods including the NICOT system of rearing queen bees. Allen currently serves as an NCSBA Mountain Regional Director.

In closing, Allen has been in Pastoral ministry for over twenty years and was the Pastor of Center Pigeon Baptist Church for ten years in Haywood County. Allen is currently serving as interim pastor of the Meadow Grove Baptist Church and he lives in the Bethel community with his wife, Debbie. They have one daughter, Trisha, who is a graduate of Pensacola Christian College in Pensacola, Florida with a master degree in nursing and is currently serving on teaching staff at Pensacola Christian College. 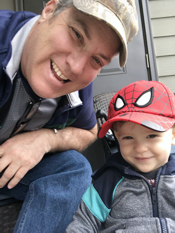