1. Young queens usually do not swarm during the first year.

2. Good ventilation is essential. Thus, remove the entrance reducer for the strongest hives in April and gradually open the weaker hives as they get stronger. Note: A ¼ inch stick on back top of inner cover works well.

3. Add supers in the middle of April to reduce any crowding condition in the hive by using “drawn” comb, if possible.

4. Remove any “field force” bees by exchanging some stronger frames from one hive with a weaker hive. This should be done between the third week of April through May. Caution: Honey flow must be present so the bees will accept new hive.

5. Remove all brood frames and leave the queen with one frame of capped brood, honey, an empty “drawn comb,” and some “field force” bees then, make a split or division using a “double-screen” board between the hive bodies.

6. At the first week of April, place the brood and bees in the top hive body or super reverse hive bodies and ensure the bees are on the bottom hive body.

a. Reverse these hive bodies during the third or fourth week of April.

b. The temperature needs to be in 70’s, sunny, and with no wind to work bees in April.

How to Hopefully Prevent Honeybees from Swarming

Swarming occurs when the “resident queen” and more than half of the established healthy bees are ready to relocate to a new hive. At this point, the natural tendency of a crowded hive is to expand and divide the colony by swarming (leaving the hive). During this process, no surplus honey is produced and in fact, the bees that are ready to swarm will gorge themselves on honey that is need for the trip ahead. You job as “hive managers” is to hopefully prevent this swarming action and instead, “split” the anxious hive and keep your bees in the apiary.

NOTE: It is vital that the beekeeper monitors their hives to hopefully prevent this natural action of swarming from occurring, or be ready to capture and hive the swarm from a tree etc. safely. Always have extra hive and equipment ready for this event.

1. Before opening the hive- inspect for any signs of swarming, ensure that you suit-up and have your equipment ready: hand tools, extra brood boxes, frames- a “frame-type” feeder (suggested) which requires the removal of two frames in the “new” brood box, smoker, hive tool, and a bee suit for protection.

a. Tuck your trousers inside your boots or band them closely around the ankles.

b. Leave the inner cover on and lift the top hive body or super body.

2. Check for any queen cells- at the bottom of each frame, because the natural tendency of the bees is to work upwards. Select a frame with one to three queen cells and remove it.

3. Find the queen and place that frame in an empty brood box with a cover, so she will not be lost.

4. Remove one capped brood frame from the hive and place it in the new box.

5. Place the queen on a frame in the brood box of the current hive, so the “field force” bees will return to the hive.

a. The hive should now contain the following: one frame of capped brood, the queen, one foundation frame of honey, pollen, and an empty drawn comb or foundation for expansion.

c. Place some green grass in “double-screen” entrance to orientate the bees towards the new hive body.

6. Splitting the hive- you can perform a split and add a new queen, then wait one week before checking for any eggs. Ensure that all the queen cells are destroyed in the “split-hive.”

7. A producing queen- check the hive to see if the queen is producing and remember, it takes three to four weeks of forming to produce any bees from the queen cell.

8. Combining the hives- wait until the end of May, when the swarming season is usually over, before you remove the “double-screen” spacer and combine the bodies into one hive.

a. Now, you can move new hive as a split and use the “newspaper” method to unite the hives.

10. As a precaution- the time to swap beehive boxes begins during the third or fourth week of April and continues until the end of May.

a. Thus, swap hives during the middle of the day when a strong honey flow is present, so the bees will not fight, this process strengthens a weak hive.

b. Equalizing the hive strength and the number of bees per hive helps to prevent (not eliminate) their tendency to swarm.

If you have any questions about preventing swarms, you can contact Tyree at tkiser@charter.net, or visit with him at one of our monthly meetings.

Honeybees will attempt to swarm at some point in the lifecycle from any active and thriving apiary, count on this process of survival happening. It is an inherent part of the honeybee’s nature, to multiply and preserve the colony and this act of survival comes in the form of swarming. There are several reasons why they leave a healthy hive, but in the end, it is time for the queen to relocate. In our human terms we call it “leaving the nest” and in bee terminology this equates to the same thing. The honeybee will determine when it is time to “leave their hive” and move on to a new location. However, there are ways to prevent swarming if the beekeeper is diligent in their hive inspections.

The following notes were taken on April 4, 2017, during the monthly Haywood County Beekeepers Chapter Meeting. Tyree Kaiser, with forty-five years of beekeeping experience, made an excellent presentation on How to Prevent Honeybees from Swarming. These notes are not a complete representation of the entire program presented by Mr. Kaiser, however, they do reflect on techniques which will hopefully prevent bees swarming out of your established apiary.

It became evident to this beekeeper that others could learn from Mr. Kaiser's demonstration, as he discussed the art of maintaining a healthy and vibrant beehive. His primary focus involved "splitting" over-crowed hives and establishing a new hive that would expand the beekeeper’s apiary and allow them to keep what they have worked so hard to maintain, “honey in the hive!”

Finally, Mr. Kiser gave out some great advice about beekeeping to the members and visitors gathered that night, “Every time you attend a meeting or seminar, always try to learn one new thing.” His words helped me to focus on this very act and in fact, I learn many new things about beekeeping during every meeting or seminar I attend. Try it! You will find that learning about bees is a never-ending and enjoyable task. 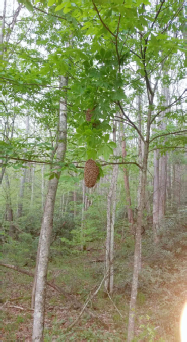 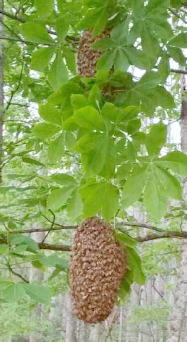