Living in rural Michigan, apple trees are common throughout the state and they grow wild wherever possible, including my property. I noticed several of them growing in a cluster among some large box elders and elm trees and it took a whole summer to remove several big trees which surrounded these apple trees. After clearing the brush away, I pruned the trees and then I waited until the following year to reap the benefits of all the hard work.

The apple trees blossomed the following spring and to my surprise there were no bees on these blossoms, not a single pollinator. As the apples started to mature, there were few pollinating insects around the trees. So, I started to research beekeeping, spending months on YouTube and the Internet to learn as much as possible about honeybees. It was time to build a couple of “top-bar” hives for a new apiary. Therefore, I picked up a set of construction plans from a series of six easy to follow videos by David Wright, on How to Build a Kenyon Top Bar Hive. David offers great instruction on this beehive and I built two hives to start Stolen Nectar Apiaries, with some adjustments of my own.

In the spring of 2015 I bought two packages of bee's after spending a full year of reading, researching, and watching hundreds of videos on YouTube. That first summer of 2015 was great for beekeeping and as the winter season was approaching I was confident that I had a couple of strong hives, but I was to find out differently. Beekeeping is an addictive hobby and in my excitement, I could not wait to build more beehives so, during that first winter I bought three Langstroth hive kits and built those units in the workshop. While I was assembling these hive kits I lost one of the top-bar hives, because of the harsh Michigan winter. In April 2016, a bee explosion was taking place in the remaining hive and this population explosion offered the opportunity to split this healthy hive and create a new colony in the dead hive. 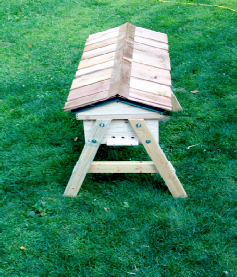 In addition, I ordered two more packages of bees for the Langs, leaving one of the three hives empty and hoping for another split in summer. My lack of beekeeping knowledge cost me dearly and at this point I still had four strong hives, with the fifth hive being a new colony that was not thriving well. Early September 2016, the newly split hive was showing signs of struggling and therefore, I took each deep box from this weaker hive and placed one box each on top of the two-stronger hives. I separated the existing hive from the newly added box with a sheet of newspaper for acclimation purposes and this became the first stage of hive failure. 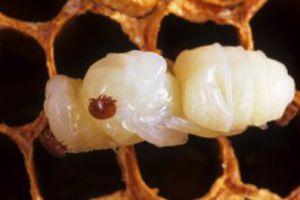 Within three weeks all the Langstroth hives began to show signs of declining numbers and by early October they all succumbed to the destructive power of the Varroa mite. Unknown to this beekeeper, hive number five was weak, because of this pest, and I unwittingly transferred these mites to the other hives when I combined the hives. I used the powdered sugar shake method for a treatment of the Varroa and it proved to be inadequate against the Varroa. By mid-October the top bar hives also declined to unsustainable numbers and eventually they too had succumbed to the Varroa and this last colony died.

The damage caused by Varroa mites is often a lesson which leaves many backyard beekeepers frustrated, but willing to press onward to the next colony of bees. Once your hives die in this manner, you never forget such an experience in beekeeping. Now, I am aware of some better methods for treating this hive-killing pest. Finally, this May I am starting over with three new packages of bees and with more knowledge about the Varroa mite, with new ammunition for removing them from the colony (oxalic acid). 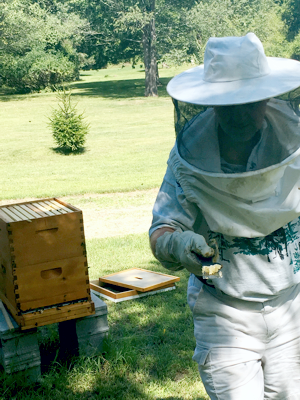 Checking the health of the hive…

and the quality of the honey.

Thank you Haywood County Beekeepers Chapter for allowing me to tell my beekeeping story. 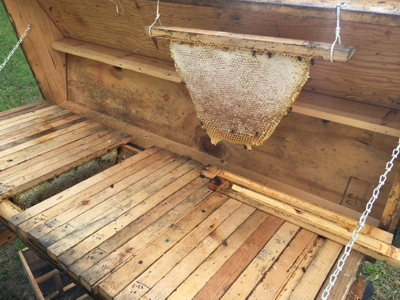 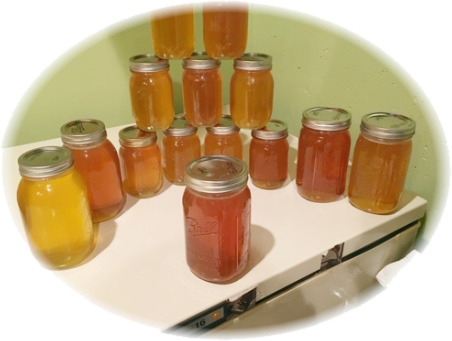 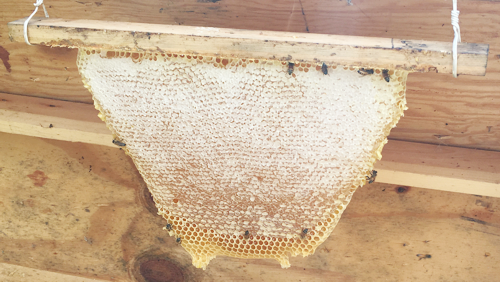